The historic first ascent of Mount Olympus in 1913 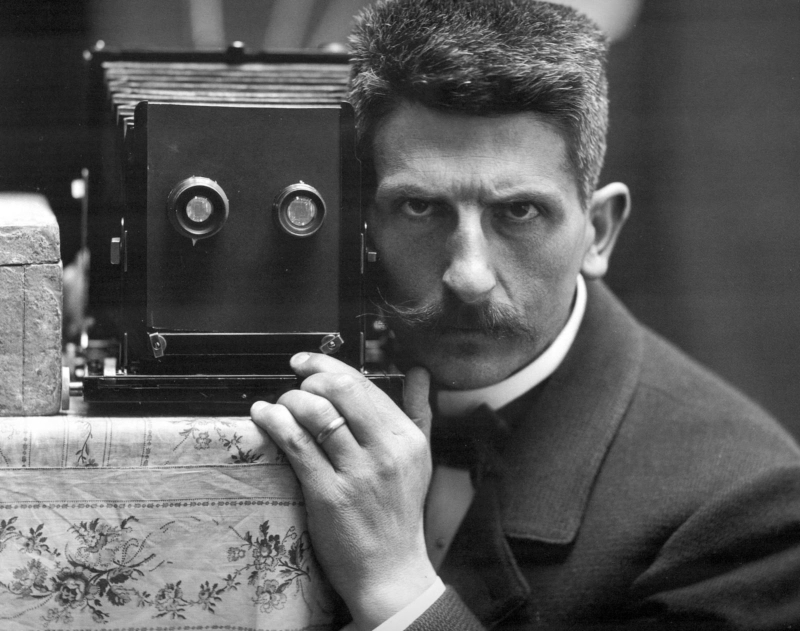 According to the official website of the Hellenic Federation of Mountaineering & Climbing in July 1913, the Swiss Frederic Boissonnas (1858-1946), a photographer and publisher, and Daniel Baud-Bovy (1870-1958), an author and art critic, arrived in Thessaloniki after having toured the liberated Epirus region to attend and take photographs of the warfare following an invitation of the Greek Government. The two Swiss, wanting to take advantage of the eight days between two compulsory cholera vaccinations, decided to explore Mt Olympus, fulfilling in this way an old dream. 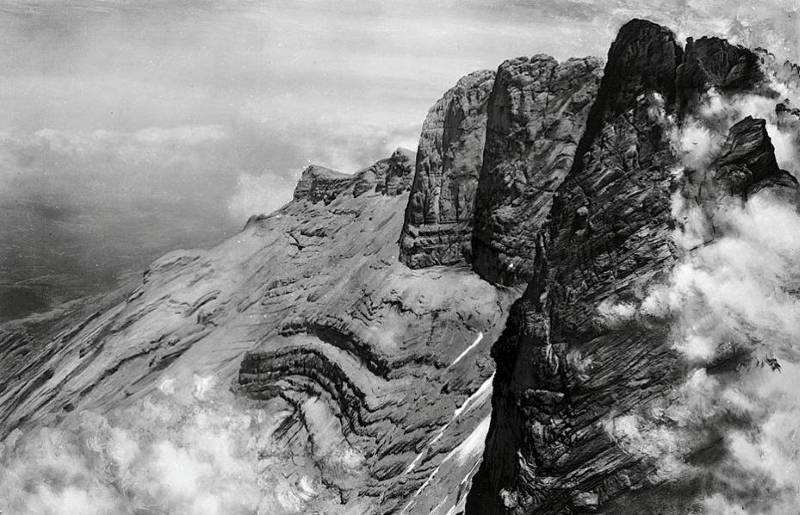 The two Swiss mountaineers arrived by boat to Litohoro from Thessaloniki and hired Christos Kakkalos (1882-1976), a wild goat hunter, to be their guide. On the following day, they set off for St Dionysios Monastery where they arrived at noon. That same day they followed the old path uphill to the north of the monastery and set camp in Petrostrouga.

On July 30, after leaving Petrostrouga and its burnt forest, they climbed up towards Skourta and after having crossed the “saddle” they reached the edge of the current Plateau of the Muses,which they immediately named Meadow of the Gods. Then they climbed up to Prophet Elias summit and explored the foot of Mt Stefani. They named Stefani the Throne of Zeus, while giving Skolio the weird name Black Top (because at that time the side facing Megala Kazania (Big Cauldrons) was very dark. 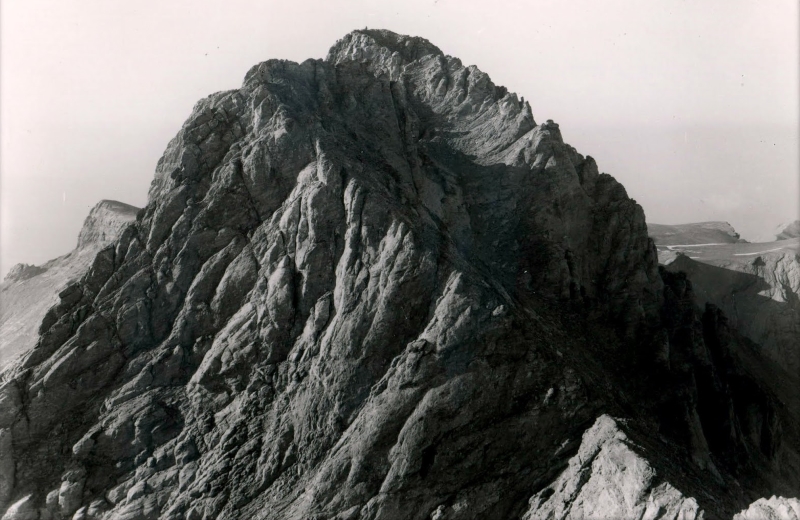 From the plateau they climbed down steep scree and in two hours they reached the edge of the forest, where there was a hut used by woodcutters. At this point there now is the small clearing, north of the refuge Spilios Dear, which functions as a heliport. In the hut they realized what exactly the path to the top of Mount Olympus is.

On July 31, while the team had decided to return to Litochoro, they changed their minds near the monastery and attempted to climb the highest never conquered summit of Mount Olympus. So they returned to Prionia, where they were faced with a terrible storm. The following day, although quite tired they climbed up Mavrolongos and in the afternoon reached the hut previously mentioned where they stayed overnight. 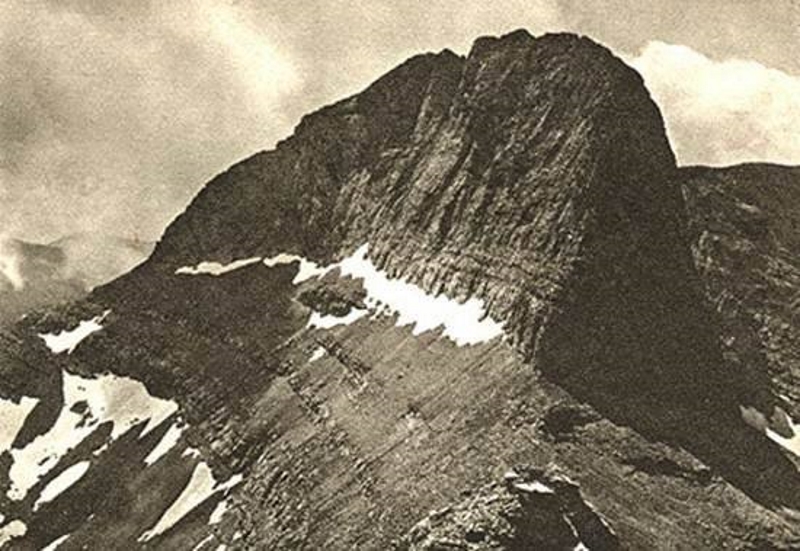 Before dawn they set off in rather extreme weather conditions with severe fog, hail and strong winds. After a laborious ascent through small gullies, scree and steep slippery rocks, they reached a narrow ridge (from the description it seems they climbed up straight from Zonaria). They climbed in the mist, with Christos Kakkalos leading the climb barefoot followed by the two Swiss tied with a rope.

They eventually reached a slender eroded peak which they named Victory Top (in honor of the victory of the Greek troops at Sarantaporo), thinking it was the highest peak of Mount Olympus. The Swiss climbers wrote a few words about the climb on a small card, put it in a bottle and carefully placed it under a pile of stones to protect it (it was found 14 years later and was sent to Switzerland, but today and it is exhibited in the Hellenic Federation of Mountaineering and Climbing Museum (E.O.O.A-HFMC) in Athens. However, when the sky cleared up for a while, they saw another more impressive peak above the place they were and realized they had made a mistake. More than frustrated they climbed down from the craggy peak they then called Tarpiia Stone. However, as Boissonnas wrote later, in the heart of every mortal there is a spark of Prometheus’ fire. 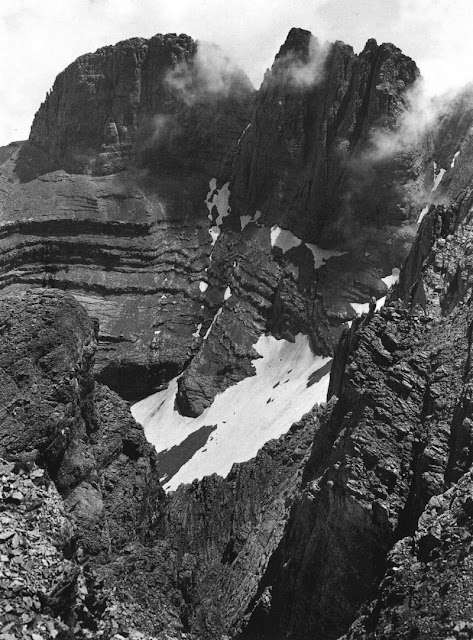 Christos Kakkalos with his head lowered was silently climbing down the steep ridge. Then he stopped. Before him lay the “vertical couloir» leading to the highest peak. “Shall we go up?” he asked. The two Swiss climbers nodded. It was the secret decision the three of them had taken earlier, each one for himself without exchanging a word. They shared the same thought and the the same feelings. Without uttering a word Kakkalos left this photography equipment at the base of the couloir and scrambled up in the most decisive way through smooth and dangerous rocks, followed by the two Swiss. He had soon reached the top; it was the top of Mount Olympus.

So on August 2, 1913 (the Swiss already used the same calendar), at 10:25 a.m., the group conquered the highest peak in Greece, the untrodden then summit of Mount Olympus. The summit was conquered by Christos Kakkalos, Frederic Boissonnas and Daniel Baud Bovy. Christos Kakkalos later became the first official guide of Mount Olympus and he last climbed the highest peak, Mytikas in 1972. 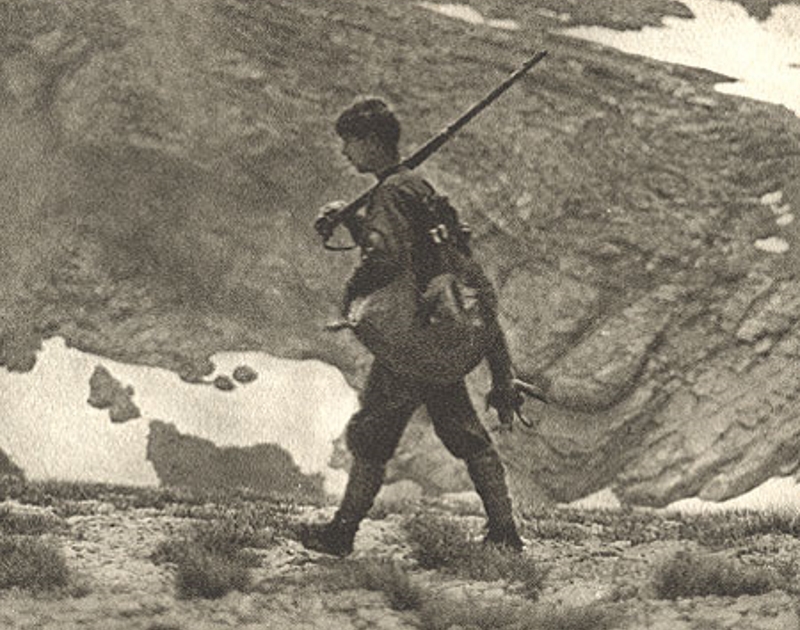 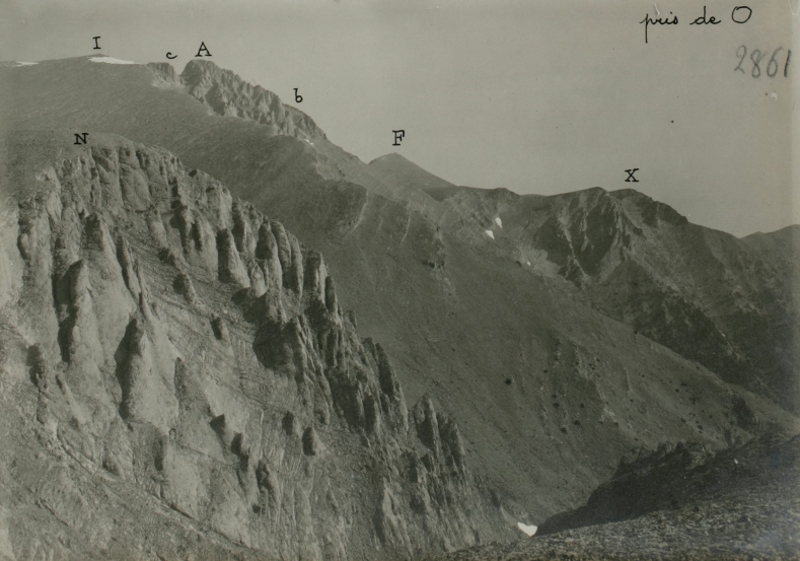 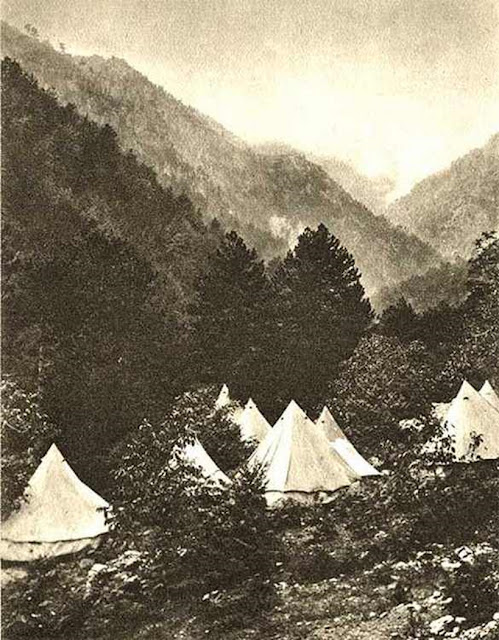 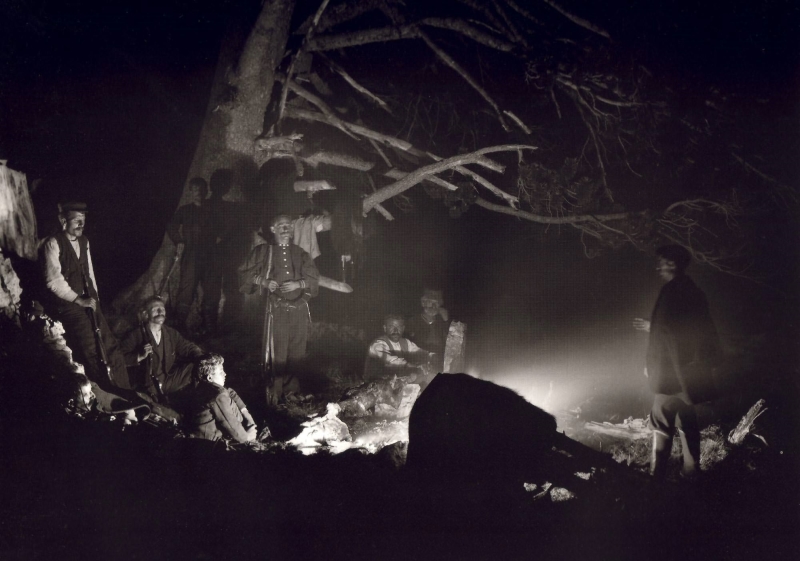 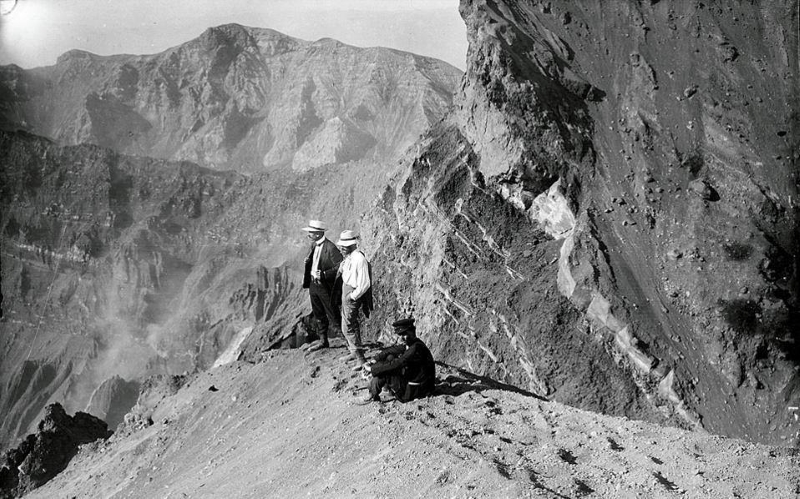 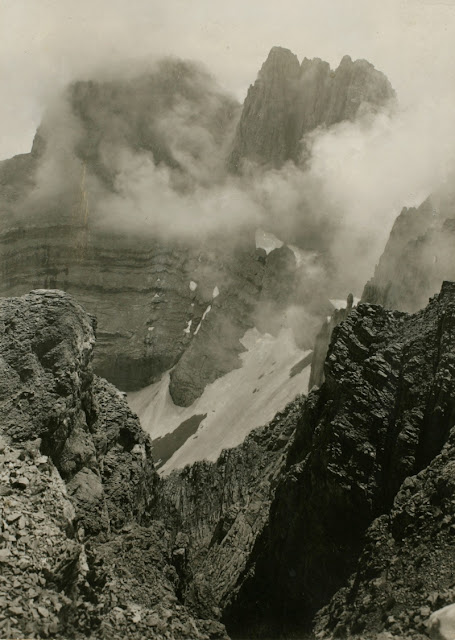 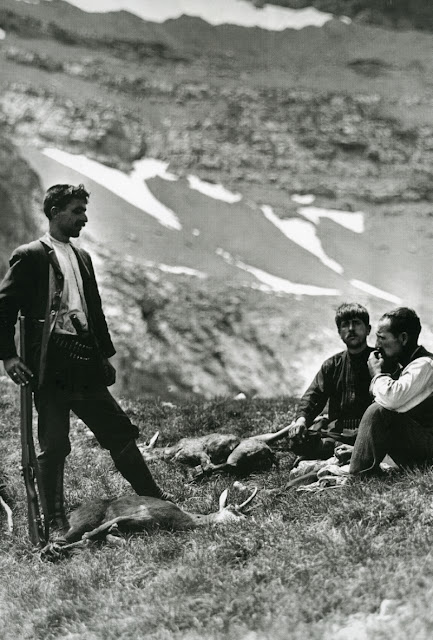 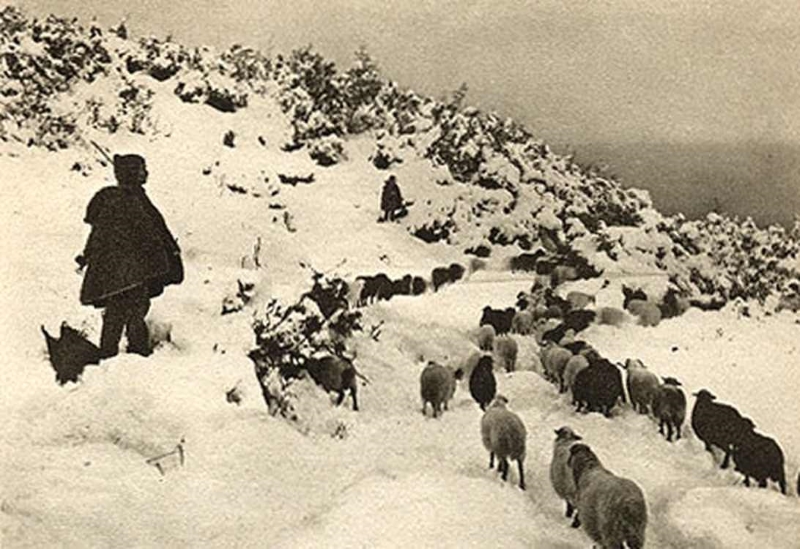 Shepherd with his flock at Mount Olympus (Photo © Fred Boissonnas) 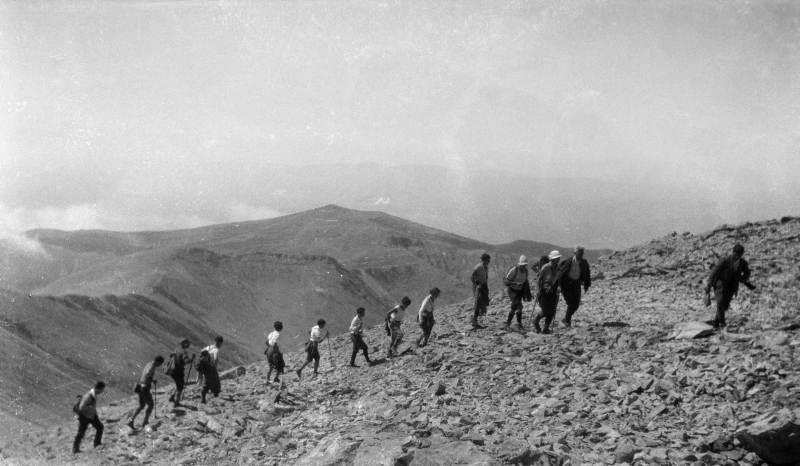 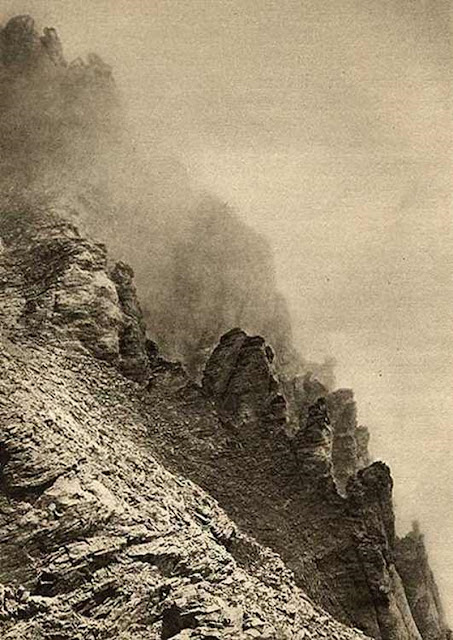 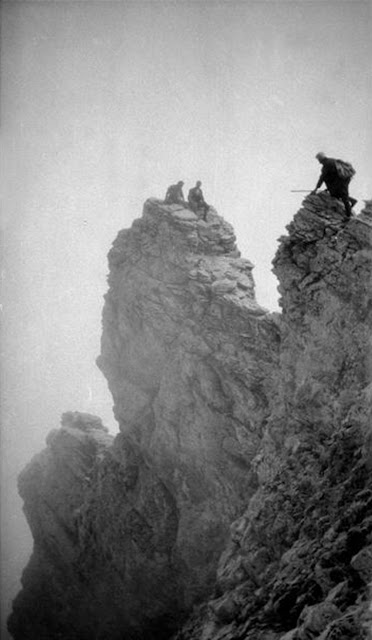 At the top of Stefani peak (Photo © Fred Boissonnas)